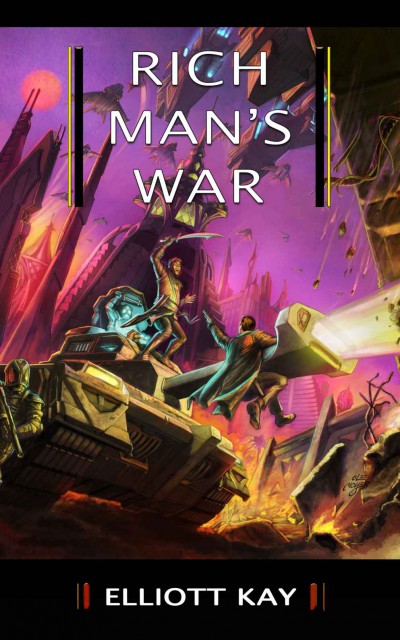 “They will never let you go…because there’s no money in it.”

No one walks away from business with the three biggest corporations in the Union of Humanity. Cutthroat trade deals, relentless propaganda and bloody covert operations drive that point home as the star system of Archangel slips further away from corporate dominance. Yet despite all their power, the Big Three are more vulnerable than anyone knows—leaving them desperate to make an example of Archangel.

Tanner Malone would gladly avoid such struggles. He’d rather just run out the clock on his enlistment in the Archangel Navy. Instead, he’s been ordered back into the front lines of a cold war that quickly grows hot. He doesn’t know about his government’s shady deals, or about the old enemies lurking in the shadows. All he knows is that the sky is falling—and he’ll have to fight like hell if he doesn’t want to be crushed beneath it.

Outstanding, Better space opera than John Ringo and David Webber
Rich Man’s War, one of the rare times the sequel is better than the original. Elliot Kay ratchets up the action and drama with the inevitable escalation between the world’s of Archangel and the debt holding mega corporations that have a stranglehold on humanity.
-RFox

Elliot Kay is quickly becoming one of my favorite authors. I have read all of his books and every single one is incredibly entertaining.
-Nic

Caught me from the first page. Fast-paced action scenes, exciting combat, steady plot and excellent character development. What’s not to like?
-Wilma Robert